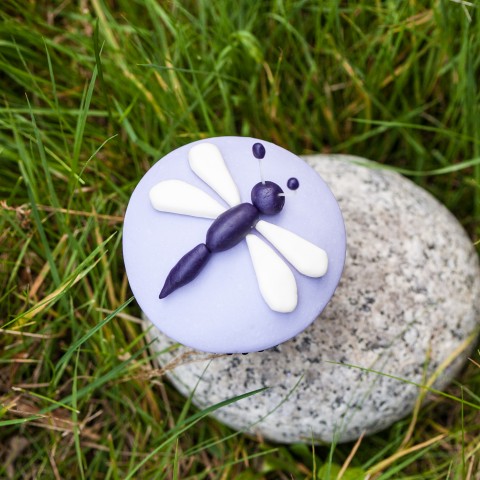 When I agreed to bake cupcakes for a local fundraiser, I didn’t plan to get fancy.  Since I had also offered to help my friend Peg decorate four orca cakes (yes, four, sort of like this) for a birthday party the same weekend, I felt pretty sure I wouldn’t be up for another big project.

Here’s what happened, though.  I had so much fun working with Peg on Friday night that, when Saturday arrived, I felt inspired to try something new.

As my chocolate cupcakes baked, I browsed through Planet Cake, an intimidating book that includes instructions for cakes shaped like record players, spike-heeled boots, and meat-loaded grills.

When I found the page with the dragonfly cupcakes, though, I knew I’d picked up the right book.  I’ve decorated fondant-topped cupcakes before, and these looked pretty simple.   The book suggests using a heart cookie cutter for shaping wings and  rolling seven small balls for insect’s body.  Florist wire or mung bean noodles add a finishing touch as antennae.  These cupcakes, I knew, I could  pull off in a couple of hours with materials I already had on hand. 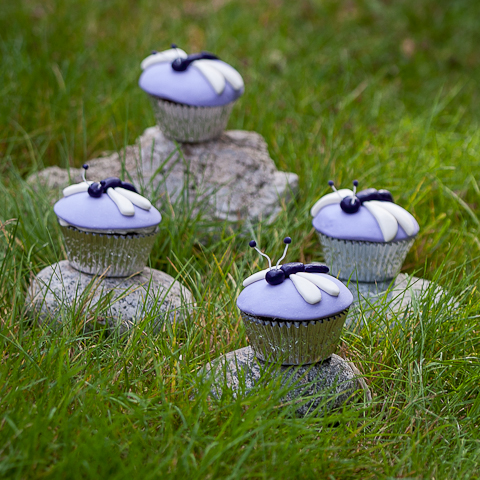 After I mixed up a batch of marshmallow fondant,  I used my smallest heart-shaped cutter to create some white hearts to set aside for wings.  As I finished cutting the 48th heart–two hearts for each of my 24 cupcakes–I realized that I wouldn’t have enough fondant to finish the project. 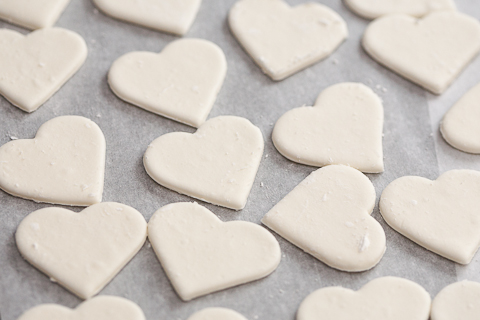 I mixed up a second batch of fondant, colored it pale purple, and cut 3-inch rounds to top each cupcake.  I smoothed the lavender rounds onto thinly frosted cupcakes with the palm of my hand and gently massaged the edges toward the liners with my finger tips. 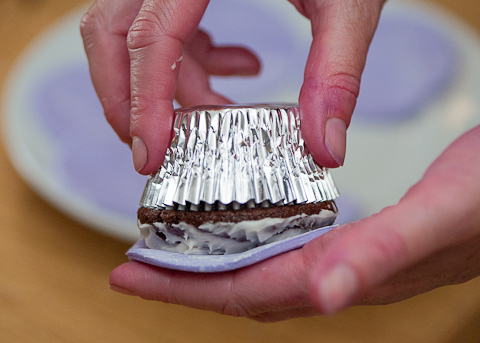 Once I finished topping the cupcakes, I colored a portion of the fondant deep purple for the dragonfly bodies.  Shaping and applying seven tiny balls each to 24 cupcakes seemed a bit tedious;  I decided three shapes would suffice — a round head, and oval thorax, and a narrow tapered cone to finish the abdomen.  A dab of water, brushed on with a small paintbrush, helped the segments stick to the fondant on the cupcakes.

Once I started piecing dragonflies, I realized that my 1 3/4-inch heart cutter had produced wings far too large to fit on the cupcakes. Rather than cutting the hearts in half and laying them neatly on the cupcakes as wings, I ended up trimming off just a portion of each half. 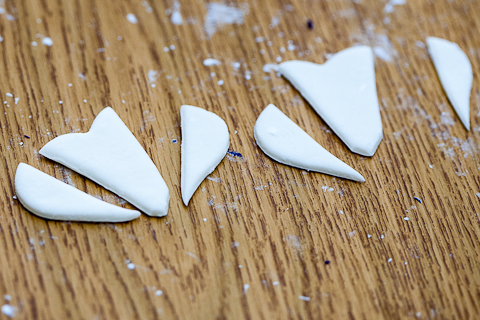 This worked well, but wasted a great deal of fondant.   If I had figured this out beforehand, I could have formed the wings earlier and used the scraps to top the cupcakes, thereby saving me the trouble of making an extra batch of fondant.

I actually like the look of the longer, narrower wings I ended up with better than the shorter-squat ones pictured in the book, but I might look for a tiny heart cutter for simplicity’s sake for the next time around. 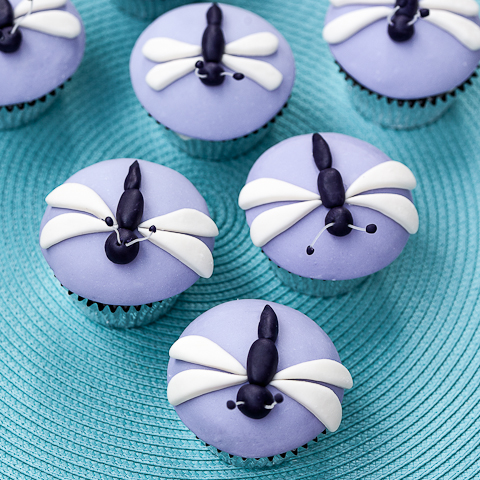 I didn’t have florist wire or mung bean noodles on hand, but I did have some thin rice noodles.  These, topped with tiny balls of fondant, worked perfectly for antennae.

I ended up spending more time that I had planned, mostly because of the extra effort imposed by the wings, but all in all, these came together pretty quickly for such cute little cupcakes.

If you’ve been looking for an excuse to try working with fondant, these would make a great starting place.  Unless you’re like Peg, of course, who isn’t afraid to bust out four killer whale cakes on her first try. 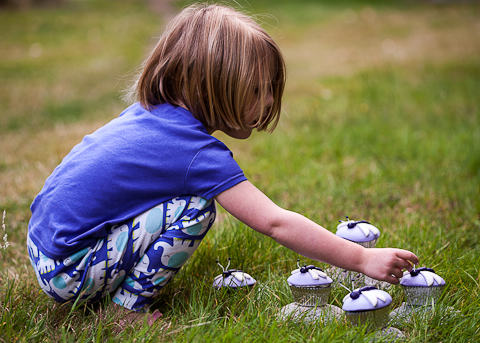 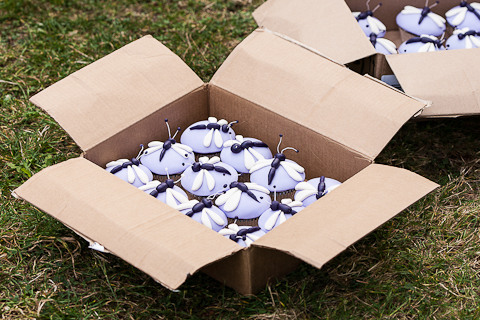