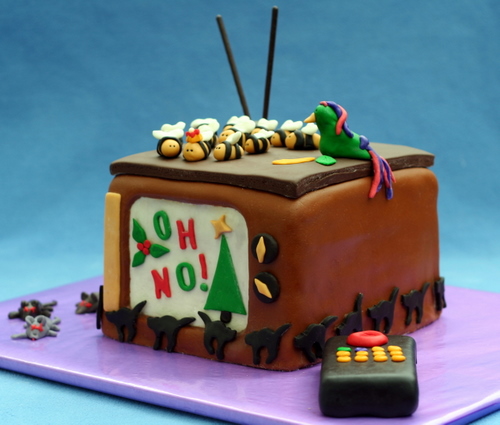 When I was a child, my parents took me to see musicals in San Francisco on a regular basis.
Clearly they loved musicals;  our hall closet’s shelves sagged with Broadway musical albums.  Once my parents scored tickets for a show, I’d beg for them to play that record for me nonstop.  Long before I put on a fancy dress and headed across the bridge toward that sparkling city rising up from the bay, I knew all the songs by heart.   When the hum of orchestra members tuning their instruments filled the theatre, I could hardly wait for curtain’s rise.

I’ve seen many, many musicals (and even performed in Carousel in high school), but I now have a new favorite musical:  “Oh, No!  Granny’s Got the Remote!”

And I swear it’s not just because my daughter sang and danced across the stage as an oppressed worker bee. 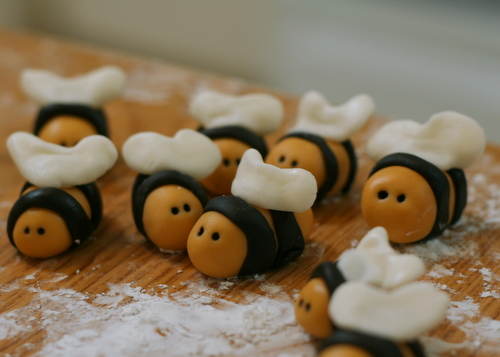 Unless you live on San Juan Island, or know someone who does, you probably missed the show’s world premier the weekend before Thanksgiving.  I’m so sorry for you.

The talent on this tiny island amazes me.  It’s cool enough that 50 island kids and 11 adults pulled off this professional show.  Cooler still is the fact that that local Penelope Haskew wrote and directed the play, and that another local, Teddy Deane, composed original music for the production that I now can’t get out of my head (yes, that’s me lost in thought singing, “Cats,” or “Workin’ for the Queen,” in line at the grocery store).   It’s also cool how so many people came together to create this show, sewing costumes, painting sets, gathering props, creating choreography, and on and on and on.

As the show begins, children fight and adults one-up one another at a family holiday gathering.  Granny takes charge by whisking away the especially naughty kids with her magical remote.  Once they’ve been sucked into her giant television, they’re forced to watch vignettes highlighting life lessons they’ve somehow missed.  Poor downtrodden bees buzz, cats and rats brawl, and destitute shoemakers turn their fates over to a cuckoo bird.  Of course all ends well.  Almost everyone learns their lessons and gets to return home, where even the adults have learned to play nicely.  Imagine that.

The week before the show opened, Tamara called me during rehearsal.  Panic started to set in that Eliza might be up to some mischief, but I heard her ask, “Will you make a cake for the cast party?”

I had already agreed to make a three-tiered cake for a party the Monday following the show.  I mentally tried to calculate whether it was even possible to pull off two cakes in one weekend, but that made my head hurt.

Before I got off the phone, an idea for the cake started to take shape — a television set with characters from each vignette on or around it.

Because I had two cakes to decorate on a theatre-filled weekend when my parents were coming to town, I baked every night the week before the show started its three-day run.  I’d never frozen cakes before.  I wrapped each layer in plastic wrap and then sealed it in a zip lock bag.  I decided to thaw them in their wrappings.  The outer zip lock bags dripped with condensation, which made me crazy-nervous, but the thawed cakes emerged from their wrappings in perfect condition.  You can’t even imagine my relief.  I had no time to spare. 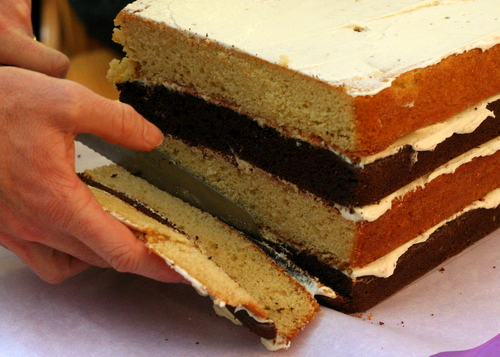 On Saturday night after curtain call and small girls’ very late bedtime, my husband and I got to work.  I lost count of how many batches of marshmallow fondant I mixed up to decorate it.  We covered a stack of four 9-inch square cakes with white fondant, and then re-covered it with brown fondant.  My husband produced a scalpel blade — an honest-to-God medical-grade scalpel blade — to cut the rectangle out of the brown fondant that would reveal a white television screen.  We take cake-making very seriously around here, but even I was impressed.  I’m glad he felt willing to wield it, because I would have probably cut my hand off in my semi-delirious state. 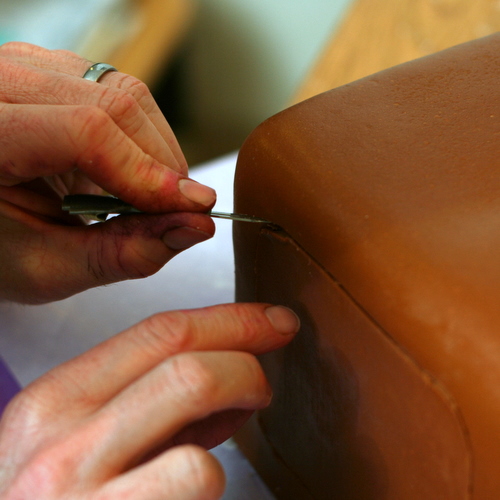 By the time we’d frosted, trimmed, covered, recovered, and incised the cake, formed fondant figures to decorate it, and produced a graham cracker remote with a laser pointer tucked inside to accompany the cake, the clock read 4:30 am. 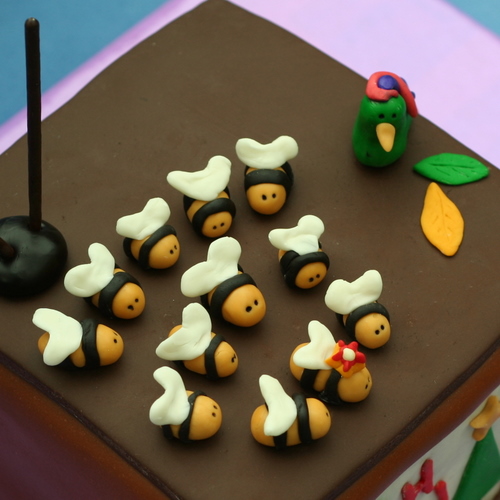 The next morning came too soon.  The girls took one look at the cake and said, “You didn’t make any rats!”

The night before, when I’d attached cat silhouettes all the way around the cake’s base for “The Girl Who Drew Cats” vignette, I tried to convince myself that they fully represented the scene. 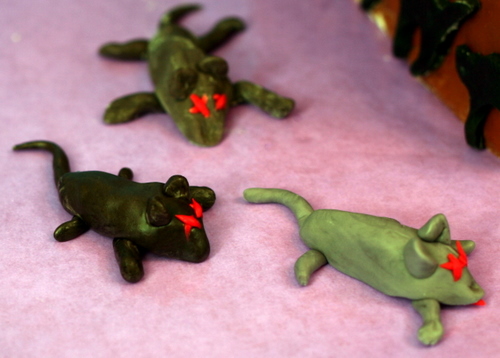 After breakfast, I shaped some dead rats with the leftover fondant.  My husband made me stop at three.  This cake thing is some kind of addictive.  Declaring a cake finished is about as easy as getting a catchy show-tune out of my head.