email
Maple syrup instead of sugar adds its distinctive sweetness to this award-winning apple pie recipe. 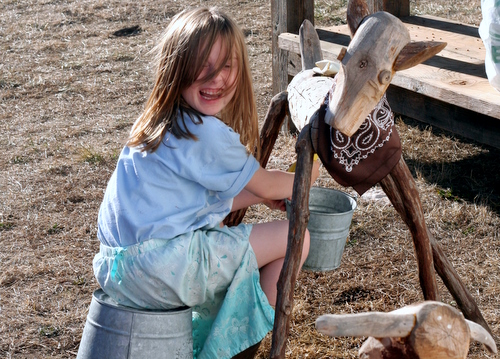 Before I moved to Friday Harbor, Washington, I’d never attended a county fair.   I couldn’t even tell you the location of the fair grounds where I grew up in Northern California.
But in Friday Harbor, there’s no missing the San Juan County Fair.  I’m pretty sure you’d get voted off the island if you tried to skip out on it.   When carnival rides load onto the ferry bound for our quiet town, people get excited. 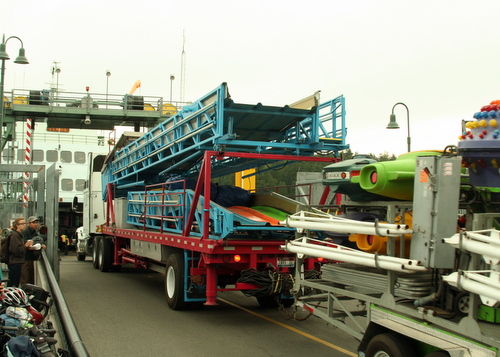 But it’s not The Tilt-o-whirl, or The Zipper, or even The Octopus that makes the fair. 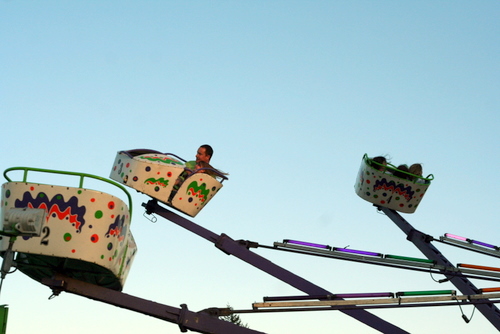 Untold hours go into preparing and staffing local booths and activities.  One year at the agricultural tent, I watched a guy build a cob oven.   For several days afterward, a local baker mixed up bread on the spot and slid it right into that cob oven.

The Trash to Treasures folks must spend months collecting junk to stock their building station, where small children can wield hot glue guns and operate band-saws as they breathe new life into other people’s garbage.  A cast off doll dress inspired Eliza to make a girl of sorts from an old water bottle, a caster, nylon cord, plastic spoons, and various other tiny parts.  Doesn’t she look like C3PO’s girlfriend? 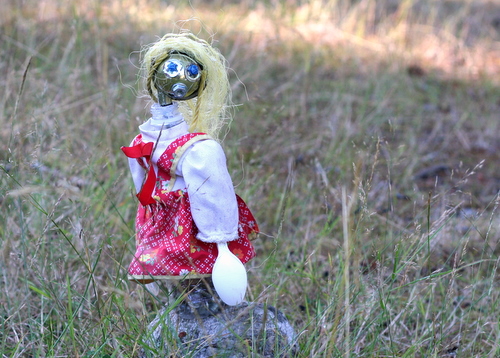 This bubble machine, one of Trash to Treasures’ highlights, inspired our tinkering.  If only we could have gotten our own creations to move by themselves. 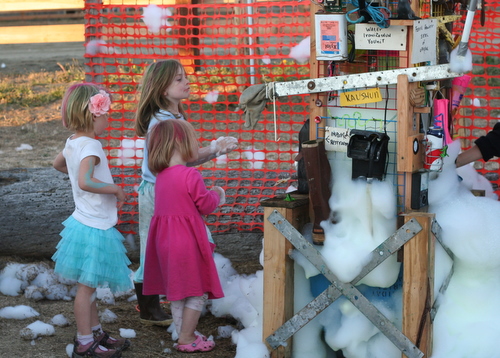 Just milling around the fairgrounds during fair week makes me happy.  I’m not a bustling scene sort of girl, but this bustle is my small town bustle.  I love bumping into people out of their regular context — a grocery store checker, my high school students, the guy I swim next to at the gym, just to name a few.

And then there’s the food.

By the end of the week, the fish taco gal knew Eliza didn’t want anything in her tortilla but fish.  She even started charging her a dollar less for her order, a generous gesture since she really only omitted cabbage and salsa.   Tessa discovered that she liked ketchup and ate a corn dog every night, sometimes two.  She didn’t like the breading, but corn dogs cost less than straight up hot dogs, so we happily peeled off the cornbread for her.  My husband and I mostly ate chicken alfredo sandwiches handcrafted by Tommy, who always takes a week off from his job at Friday Harbor Labs to run a food stand.

Before we headed home each evening, my kids sugar-coated themselves gobbling up snow cones or ice cream or cotton candy.  My husband likes to pretend he’s a sucker, but I know that he really just wants to eat something sweet himself.  I guess that makes me the sucker. 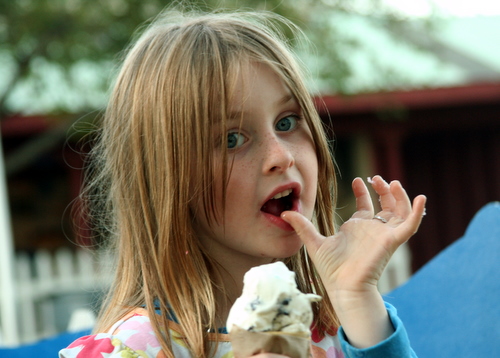 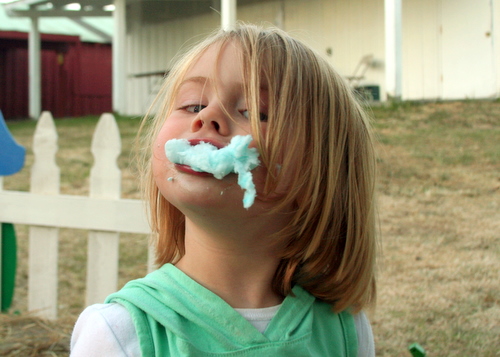 Even though bedtime’s hour had long-since passed by the time we finally made it home each night, the girls always went straight into the bath to soak off the sugar, the pink and purple hair dye, and the manure they surely picked up while rolling around on the ground ogling the week-old piglets.

Right before fair-time our first summer here in Friday Harbor, before this annual week of indulgence had gathered me into its fold, people started asking what I planned to enter in the fair.  Since I had never attended a  fair before, the idea of entering something had never occurred to me.

“What do people enter?”  I wanted to know.

“Oh, anything, really,” everyone said, looking somewhat surprised that I had to ask.

Turns out they weren’t kidding.  There’s a category for pretty much anything you might dream of making or growing or raising.  I looked it up.

And everyone I knew planned to enter something:  handcrafted earrings, hand-knitted sweaters, photographs of children, garden-grown zinnias.

So I tried to get in the spirit of the fair by entering an apple pie.  I’ve been baking pies for a long time, and I figured I wouldn’t embarrass myself with my effort. 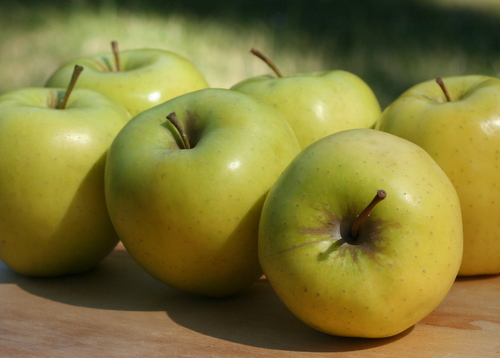 The day after the judging, I wandered over to the baking booth;  I didn’t see a slice of my pie nestled amongst the apple pie entries.

Then my husband called me over to another case, the one that contained the special awards for baking.  I had won the Apple Pie Award, which came with a perpetual trophy;  it was mine for the year. 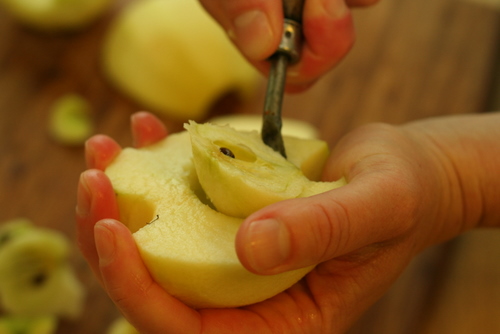 The trophy took some time in coming to me.  The previous winner needed to return it, and then the fair folks had to send it to the engraver.   It finally arrived and then sat unnoticed on my counter for months.  One day I happened to read the name above mine — the only other name on the trophy — and  I realized I had recently gotten to know last year’s winner.

The next time I saw apple pie-aficionado Shannon, I mentioned that I had noticed her name on the trophy.  We talked apple pie, and then she shared a story about why the trophy contained only two names.  I’d always assumed that the fair started the award the year before.  Nope.  Apparently the person who won the trophy before Shannon refused to give it back.  She didn’t think Shannon’s pie was good enough.  Seriously. 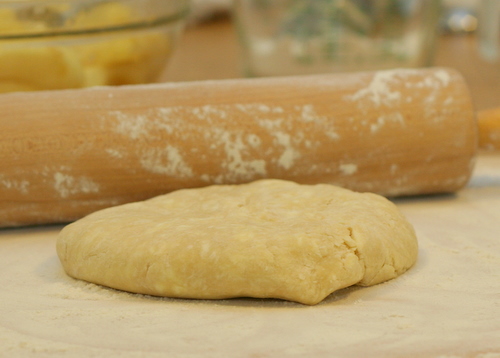 Last year, I thought about Shannon’s crazy story when my pie didn’t win the trophy a second time.  At fair’s end, I handed my ephemeral prize back to the baking superintendent and took home my red ribbon. 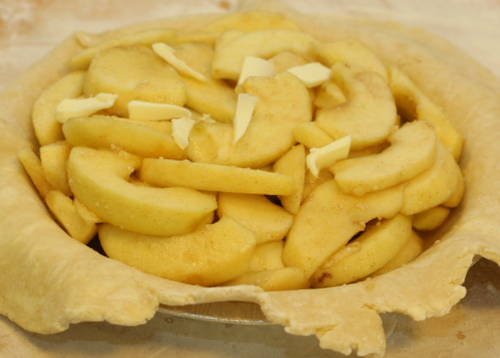 This year, right before fair time, we vacationed in Minnesota and Wisconsin.  The day after we returned, we went camping with friends.   When it came time to think about what to enter in the fair, I felt overwhelmed and decided I just wouldn’t enter anything.  At the last minute, though, my husband talked me into baking an apple pie. It was still warm when I dropped it off in the baking booth. 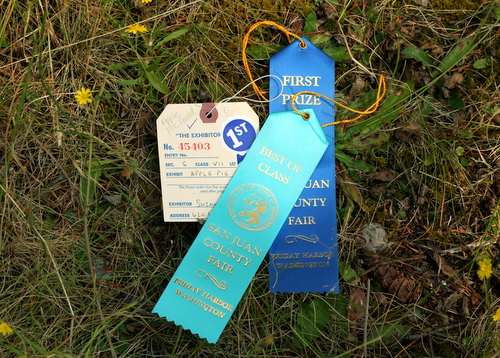 Sometime soon, the apple pie award will return to my kitchen — that is if last year’s winner decides to return it.

Whirl flour, powdered sugar, and salt in food processor with the blade attachment.  Add slices from one stick of butter and whirl until no chunks remain.  Add remaining slices and whirl briefly to chop them up slightly.  Turn food processor on again and quickly begin drizzling ice water through the feed tube, stopping before the dough comes together.  Pinch some crumbs together between your fingers;  if they don’t stick together, add a bit more water and whirl briefly.  Turn the mixture out onto a large piece of plastic wrap.  Use the plastic wrap to help you bring the dough together;  fold the edges of the dough toward the center and press down until it holds together, taking care not to overwork the dough.  Divide it in half and shape into two flat disks wrapped tightly in plastic wrap.  Refrigerate dough for at least 30 minutes.

Roll out one of the dough rounds into a 13- to 14-inch circle.  Transfer carefully to a 10-inch pie dish.  Roll out remaining round into a 13- to 14-inch circle.  Fill bottom crust with apple mixture, topping with small pieces of butter.  Brush the overhanging edge with cold water, cover with the top crust, and seal gently by pressing down on the edge with the bottom of a fork.  Trim overhanging dough with a knife and flute the edge with your fingers, if desired.  Cut steam vents in the top.

Place pie on a baking sheet to catch any overflowing juices. Bake for 30 minutes.  Reduce heat to 350 degrees Fahrenheit and continue baking for 40-50 minutes, until juices bubble thickly through the vents and the fruit feels just tender when poked with a sharp knife.  Allow to cool for several hours before serving.