This Lemon-Lime Meringue Pie’s tart lemon-lime filling could really stand alone, but the sweet billowing mass of meringue transforms a simple pie into a festive extravagance. 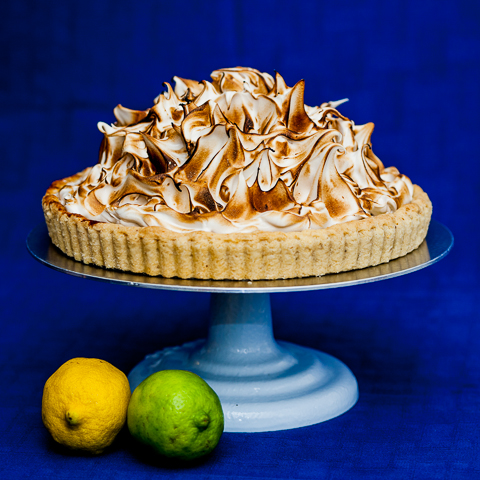 During a recent kids’ soccer game, my friend Laurie mentioned that she was making a lemon meringue pie for a catering event that evening.  Instantly, I began obsessing as I described to her an amazing version that I hadn’t made in years.

I vaguely recalled it as a somewhat unconventional recipe;  one that used brown sugar rather than white and involved heating the egg white mixture before spreading it onto the pie.

What I remembered distinctly was how impressive the pie looked — something about precooking the egg and sugar allows you to get some serious height on the meringue.  And as far as taste,  I’m pretty sure I always licked the filling bowl whenever I made it.

At the end of the soccer game, Laurie left the field to go bake her pie;  I left on a mission to track down my coveted recipe with the hope of making it again as soon as I possibly could. 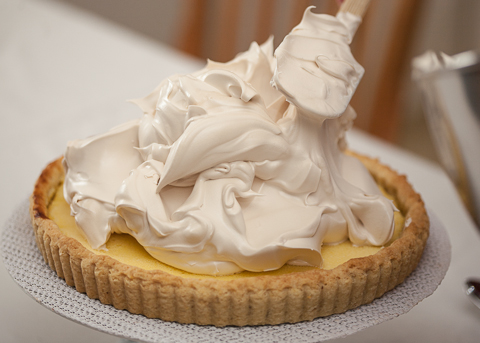 When I read through the recipe in my Mustards Grill Cookbook, I remembered why I’d stopped making it:  it called for a pre-baked pie crust.

Almost without exception (a certain chocolate crust being the exception), I hate pre-baking pie crusts.   As far as I’m concerned, whoever coined the phrase “easy as pie” never intended it to apply to desserts requiring pre-baked pastry.   I have no patience for freezing pastry dough in a pie dish before topping it with foil and adding beans or pie weights  or some other crap to help keep it ship-shape during baking.  Plus, I have had several crusts slump and sag even when I took these tedious precautions.  Just thinking about all this work gives me a headache.

The fact that, years ago, I made this particular recipe — more than once even — pre-baked crust and all, tells you something about how good it must be. 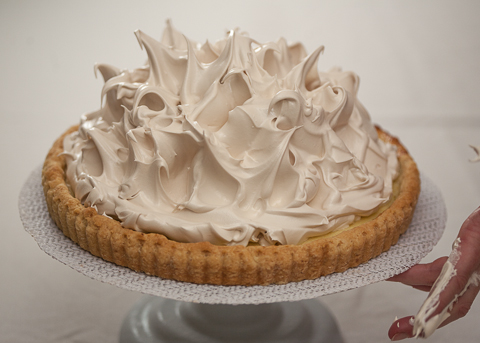 While I loved eating this show-stopping pie, the serious crust fails I endured while making it eventually caused me to give up on it.

Since my last disastrous attempt, I’ve baked a pie or two.  Now I just ignore directions instructing me to pre-bake a crust.   As long as a pie goes into the oven at a relatively high temperature to start and cooks for enough time for the crust to turn golden, all is usually well.

The time had clearly come to revisit this spectacular pie, and I jumped on the opportunity to bake it for a lemon-loving friend’s surprise birthday party. 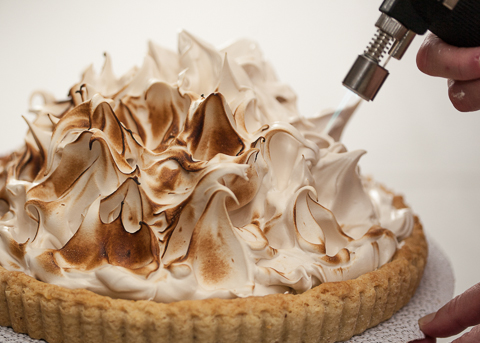 Without the hassle of pre-baking the crust, the pie came together easily on a Friday afternoon after work. While its combination of tangy and sweet flavors mingled deliciously,  the tidy, glorious slices I remembered serving (at least when the crust cooperated) proved impossible to produce.

Fortunately, I had promised my daughter Eliza, who helped me make the pie, that we’d make it again soon.  She felt rightly cheated that she didn’t get a single slice.  This gave me a good excuse to make the pie again the next day to figure out how to produce a firmer meringue.

The recipe calls for boiling brown sugar over high heat, and then pouring the molten sugar into the eggs as they whip in the bowl of a standing electric mixer. 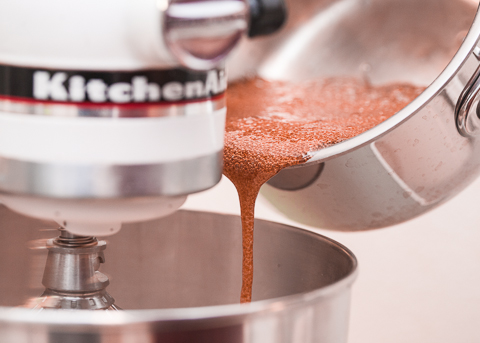 Heating the brown sugar about five degrees higher than the original recipe called for, and then beating the eggs until they were quite firm, rather than firm with soft peaks, resulted in a more solid, sliceable meringue.

To help get cleaner-looking slices with my improved meringue, I also heated the knife under hot water before cutting into the pie.  This helped produce crisp-looking wedges that looked much prettier on a plate than the soppy mess of the night before. 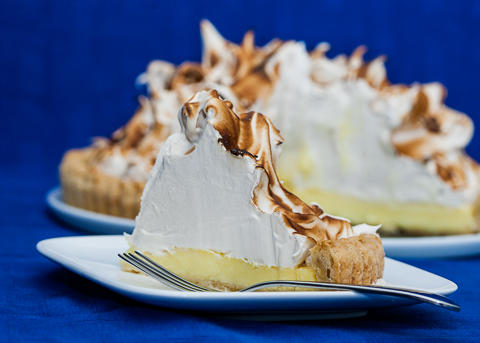 Two indulgent days of eating this pie have convinced me that I will never tire of it.  The pie portion, with its creamy, tart lemon-lime filling could really stand alone, and the addition of a sweet billowing mass of meringue transforms a simple, delicious pie into a festive extravagance. 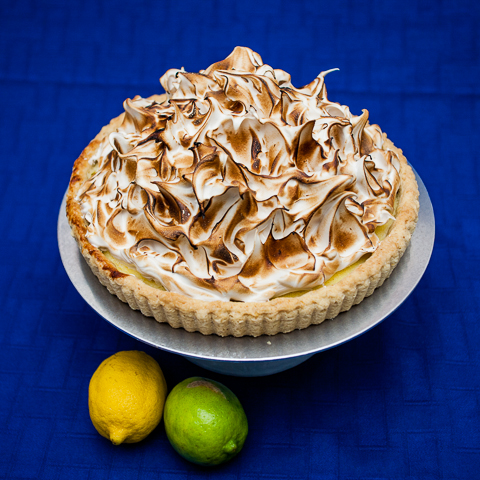 Now that I’ve worked out the kinks, I owe the birthday girl another lemon-lime meringue pie.  I feel a pie-by coming on;  hopefully when I show up at her house with a pie, she’ll let me come in and eat it with her.

To make the crust, whirl the first four ingredients in the bowl of a food processor until the pine nuts are chopped into smallish crumbs.  Add about 4 tablespoons butter and process until you no longer see chunks.  Add remaining butter and process briefly, leaving chunks the size of peanuts.

Working quickly, turn on the food processor and pour the ice water and vanilla through the feed tube, stopping before the dough comes together.  Pinch a bit of the dough between your fingers.  If it does not stick together, add a couple of teaspoons more water and whirl briefly.  Turn out the dough onto a large piece of plastic wrap.  Use the plastic wrap to help you create a large, flat disk:  fold the edges of the dough toward the center and press down to smooth out the roughness.   Refrigerate dough for at least 30 minutes.

For the filling, whisk the eggs and granulated sugar together in a large bowl until smooth.  Add the lime and lemon juices, whisking until smooth.  Add cream and whisk until combined.  Strain the mixture through a fine-mesh sieve into a large measuring cup.  Stir in the lemon zest.  Set aside.

Roll out dough into a large circle of 1/8-inch thickness.  Transfer dough carefully into an 11-inch tart pan.  Trim edges to leave a 1-inch overhang all the way around the pan.  Fold overhanging edge down inside the tart pan, pressing gently to help it adhere.  Prick the bottom of the crust five times with the tines of a fork.

Place tart pan on a baking sheet and place it in an oven heated to 450° F.  Working quickly, pour the filling into the crust and close the oven (the very liquid filling makes the uncooked tart difficult to transfer from counter to oven).  Reduce the oven temperature to 425° F and bake for 10 minutes.  Reduce heat to 350° F and continue baking until the center is just set, 20 to 25 minutes. Cool the pie on a rack, and then refrigerate until cold.

To prepare the meringue, place the egg whites and cream of tartar in the bowl of a standing electric mixer fitted with the whip attachment.  Measure brown sugar into a small, heavy saucepan.  Add water to cover the sugar, attach a candy thermometer to the pan, and turn the burner on high heat.

When steam starts to come off the whites, add the sugar more quickly.  When finished adding sugar, continue whipping until stiff peaks form. The meringue should still be quite warm.

Store the finished pie in the refrigerator.  Serve  within 3 to 5 hours, as the meringue may start to weep.