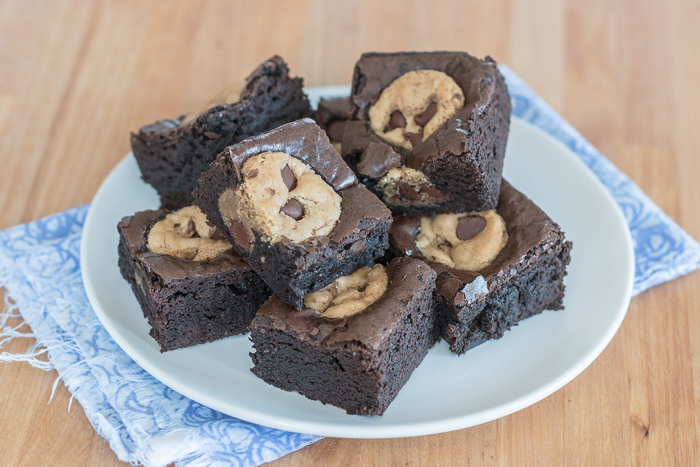 Ever since my daughter and I made chocolate chip cookie dough brownie bites this summer, I’ve been obsessed with the combination of cookies and brownies. It was only a matter of time before I added cookie dough to brownie batter and baked them together.

Now that I’ve mixed up these chocolate chip cookie brownies at least a half a dozen times, I can’t help wondering what took me so long to unite these simple dessert superstars in baked perfection.

What’s not to love about tender chocolate chip cookies and rich chocolate brownies wrapped up in one delicious package? 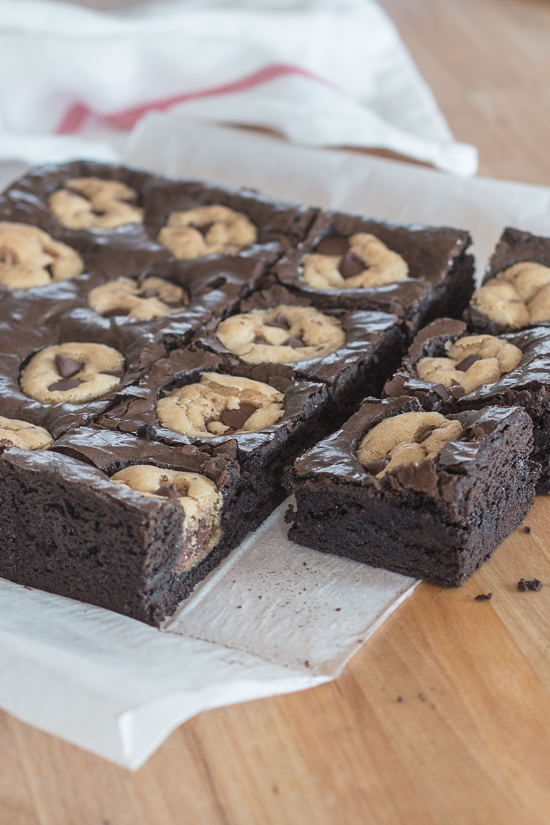 The real question, though, is what to call them? Brookies? Crownies?

Each of these portmanteau words makes sense, but I’ve seen brookies in both cookie and brownie form, which leaves me feeling confused. As for crownies, I’ve never seen the term used to describe this commingled dessert at all. Maybe that makes it better, but it’s really less obvious-sounding than brookies.

Yeah, I’m just calling them chocolate chip cookie brownies. I won’t be offended if you’d like to call them something else. 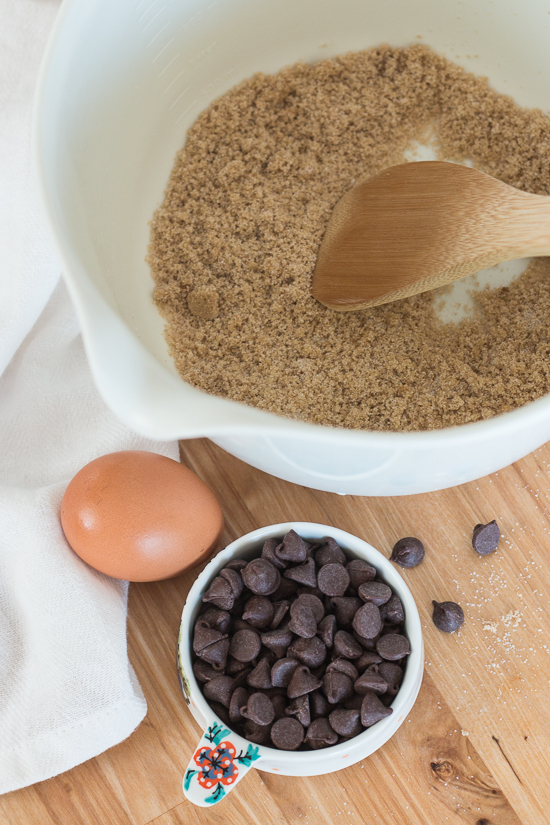 Since this sweet treat was bound to be super indulgent, I decided to create the recipe for an 8-inch square pan rather than a large rectangular one. This meant scaling down my favorite chocolate brownie recipe and using half of a chocolate chip cookie recipe.

Making brownies and cookies at the same time had the potential to make a huge mess, so I searched for ways to streamline the process. Ideally, I hoped to create a mix-by-hand recipe that generated as few dirty dishes as possible.

My brownie recipe called for melted butter, so I looked for a chocolate chip cookie recipe that used melted butter as well. After melting butter for the cookies in a saucepan, I transferred it to a bowl with the sugars and proceeded to mix the cookie dough with a wooden spoon. I then used the same pan to melt butter for the brownies and mixed the remaining ingredients right into the pan. 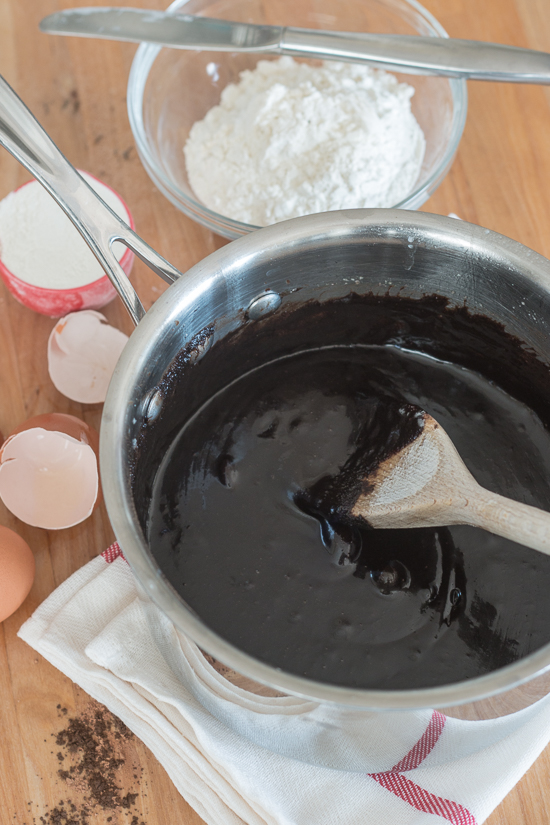 In case you missed that, you can prepare these chocolate chip cookie brownies by hand with only one saucepan and one mixing bowl! Hooray!

While delicious, my first batch took forever to bake. They also rose almost to the top of the pan, baking into the thickest brownies I’ve ever seen. Even after slicing them into small squares, their sheer decadence made them really too big to manage. 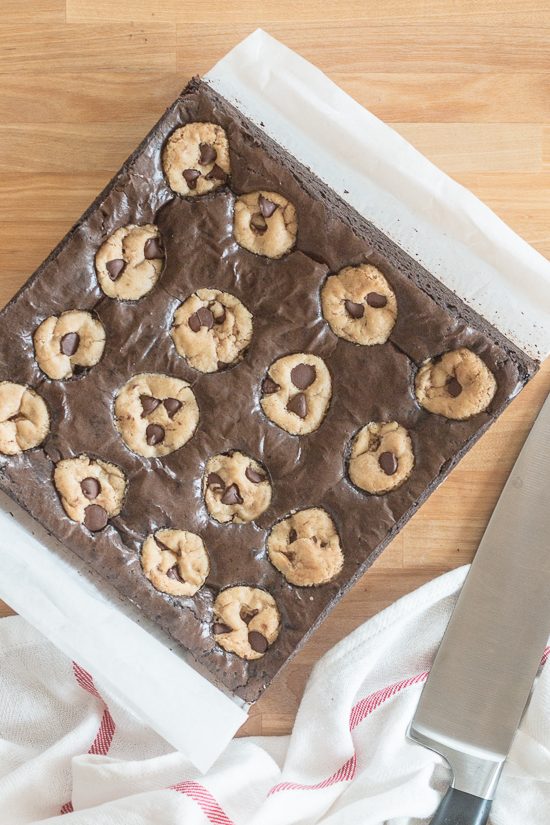 Reducing the cookie recipe even more provided an easy solution, but it meant splitting an egg in half, and this totally undermined my plan to create a simple recipe. Fortunately, the most obvious work-around — using just the yolk — turned out fine after some tinkering.

As the cookie dough bakes in the brownie batter, rather than spreading out in usual cookie fashion, the balls mostly keep their shape as the brownies bake up around them. The adorable little bits of cookie that show on top are tiny hints about what’s hiding below the surface. 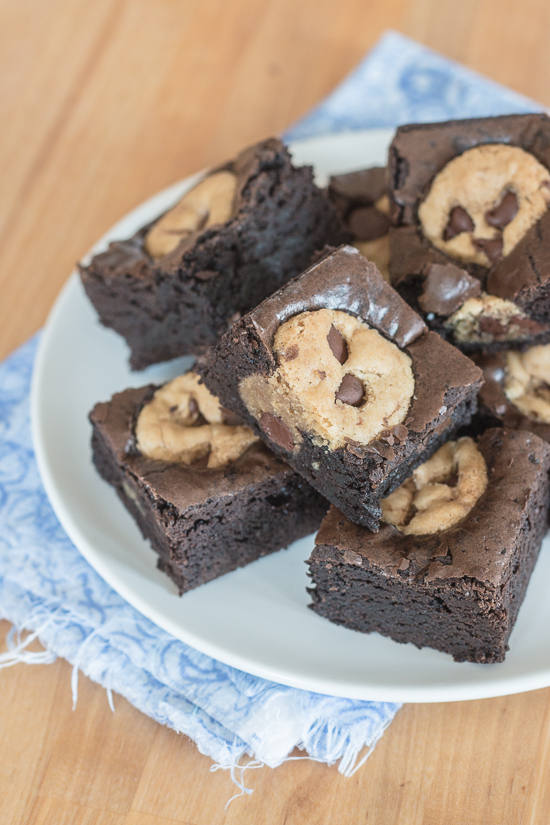 Despite their extreme indulgence, we can’t seem to keep these chocolate chip cookie brownies around for too long. If I thought I could manage eating more than one at a sitting, I’d rethink the idea of baking them in such a small pan. 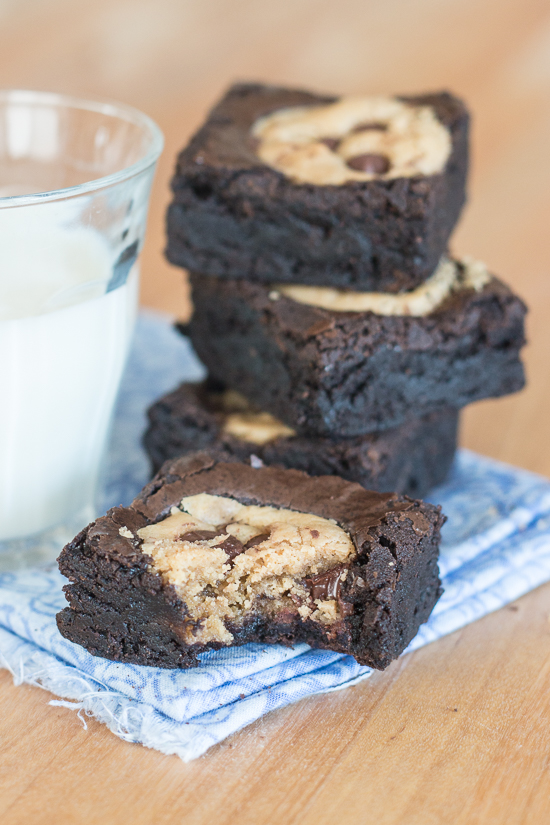 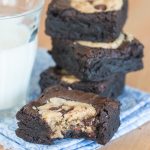 Since the brownies bake up around the cookie dough balls, the cookies don't flatten out to reveal the luscious chocolate chips inside. To give them a classic chocolate chip cookie appearance, press a few chocolate chips into the tops of the balls of dough before baking.
Prep Time15 mins
Cook Time35 mins
Total Time50 mins
Course: Dessert
Servings: 8 to 12
Author: Suzanne Cowden 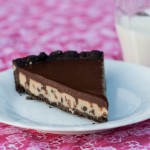 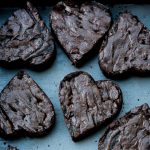 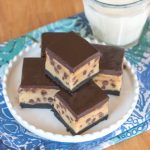 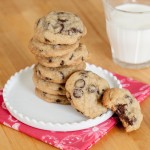