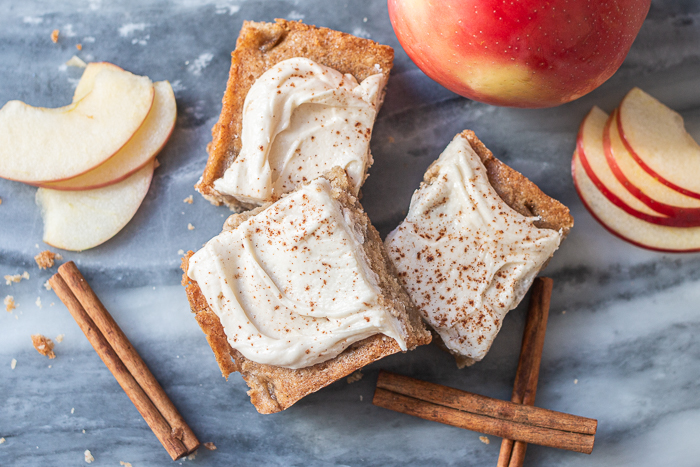 These Apple Blondies with Maple Frosting have me sneaking into the kitchen for a sweet snack at all hours of the day.

This perfect fall treat features sweet apples mixed up in a brown sugar-maple syrup batter. Chock full of apples and cinnamon, these blondies have an almost cake-like texture, so it felt only right to add some maple frosting on top.

The maple frosting, while not strictly necessary, adds a creamy-smooth sweetness to these flavorful bars. 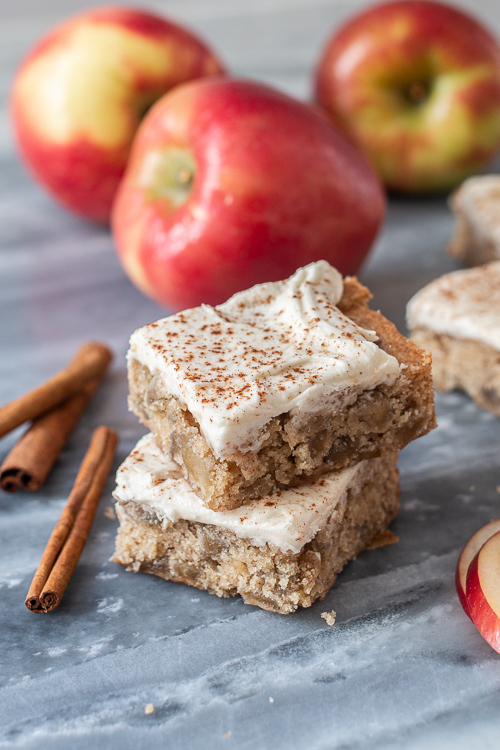 Start with the Apples

This recipe calls for just one large apple, which means minimal peeling and chopping.

Sautéing the diced apple with maple syrup and cinnamon before mixing it into the batter ensures a tender apple texture in the finished blondies. Crisp apples take lots of time to soften as they bake, so this head start makes a huge difference since this recipe only bakes for about 25 minutes! 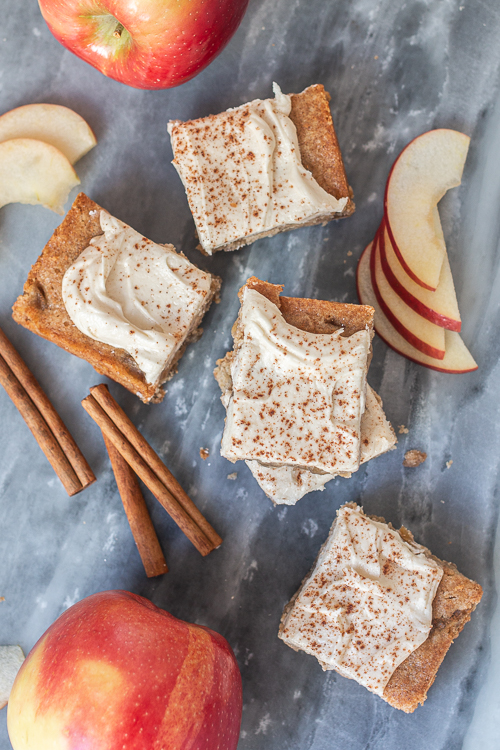 Butter the bottom and sides of an 8-inch square pan and then line it with an 8-inch wide piece of parchment paper that extends up and over two sides of the pan.

The flaps of parchment paper work like handles for lifting the baked blondies out of the pan easily.

Removing the blondies from the pan makes them so much easier to frost and cut into tidy squares. 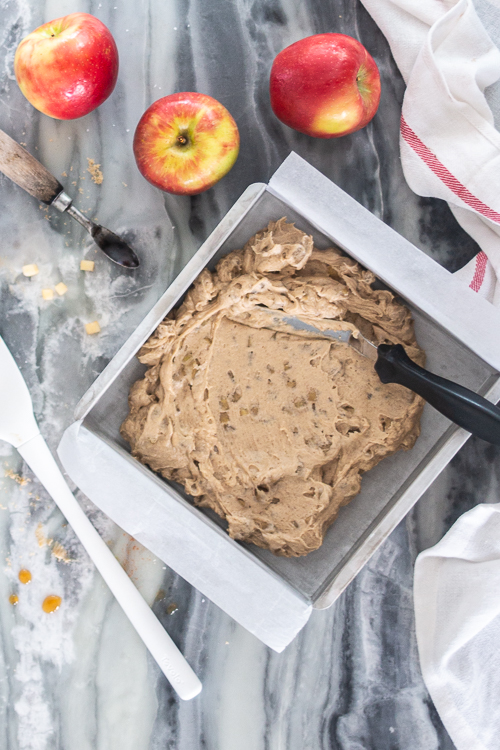 Mix together the flour, baking powder, salt, and cinnamon in a medium bowl and set aside.

If, like me, you forget to take the butter out to soften, give it a few five-second bursts in the microwave, turning it each time.

I combine the remaining ingredients in my standing electric mixer, but you can mix them by hand as well. If you mix by hand, give the butter a little more softening time in the microwave to make it easier to incorporate.

Beat the butter, sweeteners, egg, and vanilla until well combined. It will look a bit separated, which is fine. 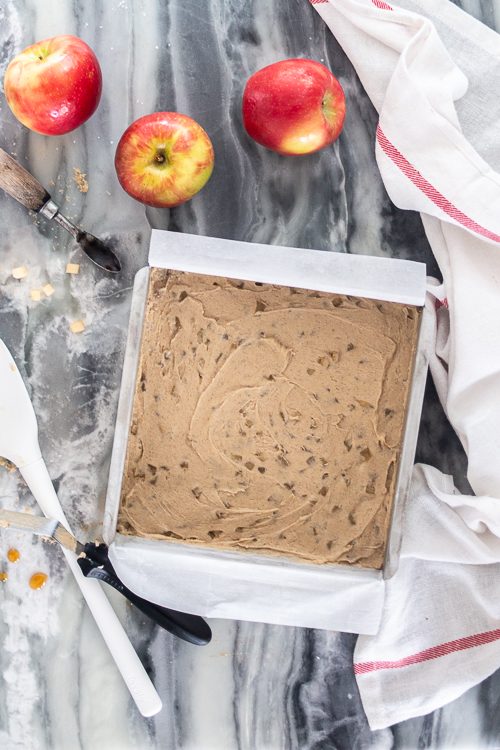 Before adding the dry ingredients to the wet, toss the prepared apples in the flour to coat the fruit. By hand, stir in half of the flour mixture until just combined. Add the remaining flour and mix to combine.

Transfer the thick batter to the prepared pan and spread it evenly to the edges and smooth the top as best as you can.

Bake the blondies in an oven preheated to 350° F until pale golden brown and just firm to touch. A toothpick inserted in the center should come out clean.

Once the blondies are cool, prepare the frosting by beating butter, confectioners’ sugar, maple syrup, and salt in a standing electric mixer.  You can also do this by hand if you like. 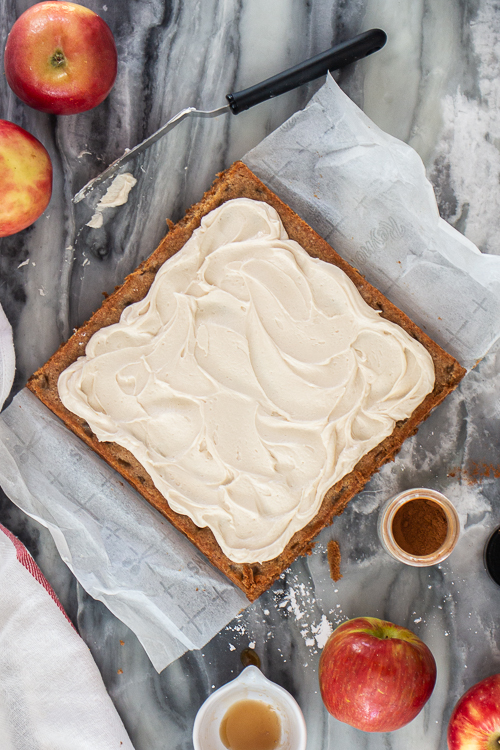 Using the parchment paper handles, remove the blondies from the pan.

Transfer the the maple frosting to the blondies and spread it evenly to the edges with an offset spatula.

I like to sprinkle cinnamon over the top of the frosting, but you could also add chopped nuts or thin apple slices.

If using apple slices, wait until right before serving to top the blondies for a fresher look since apples tend to brown once sliced. 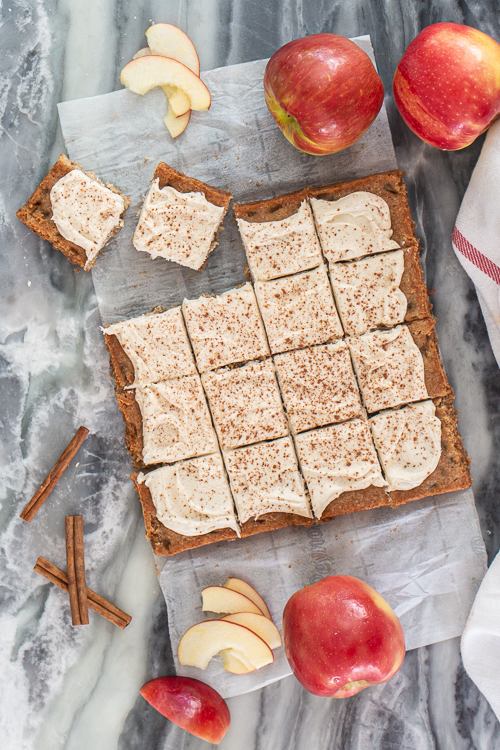 With a sharp knife, cut the blondies into 2-inch squares, wiping the blade between slices to keep the edges neat and tidy.

For something different, load up large, unfrosted blondie squares with vanilla or cinnamon ice cream. With a drizzle of warm maple syrup or caramel sauce, you’ve got yourself a decadent Apple Blondie Ice Cream Sundae!

These Apple Blondies with Maple Frosting are a new favorite at my house. They never last long, so I’m clearly not the only one sneaking into the kitchen to eat them. 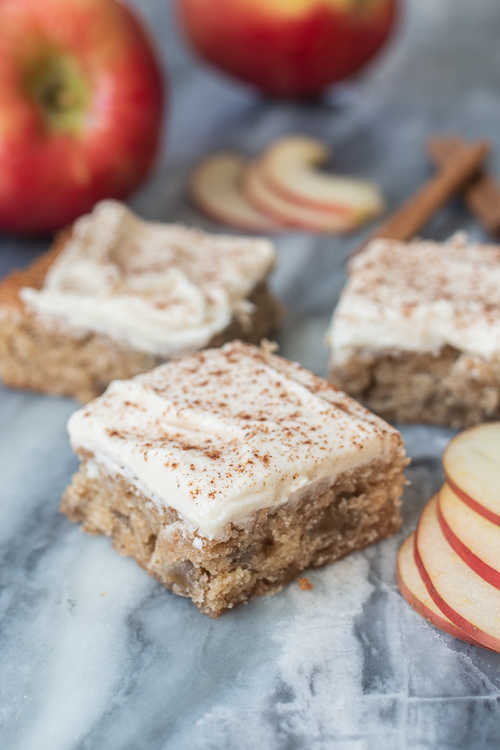 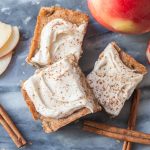 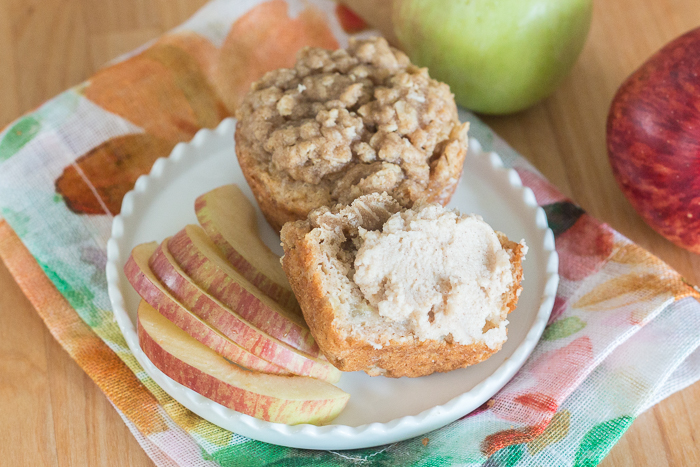 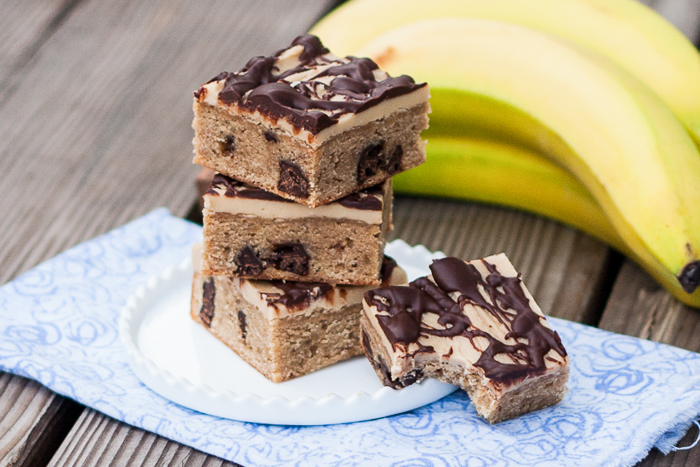 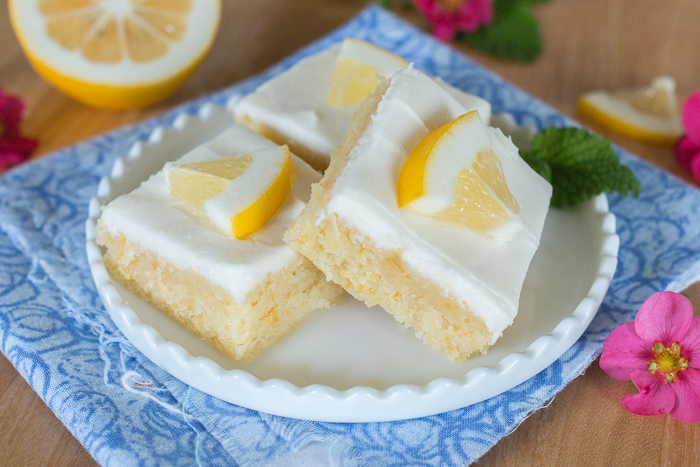