With pumpkin dough and a crisp, cinnamon-sugar coating, these squash-shaped Pumpkin Cinnamon Buns add sweetness and fun to fall festivities! 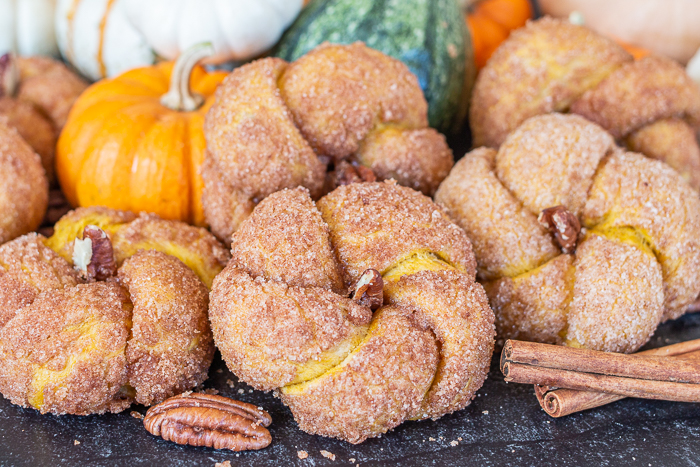 Ever since I shared a recipe for pumpkin-shaped dinner rolls, I imagined creating a sweet version of these pale orange rolls. Yeasted dough made with pumpkin just calls out for sugar and spice!

When I first experimented with the recipe, I failed miserably. I rolled cinnamon-sugar inside ropes of pumpkin dough and tied them into knots.

It seemed like such a good idea, but during baking, the dough split apart and the knots unfurled. The sugar caramelized and burned, leaving an inside-out mess in my oven.

It was such a disaster that I couldn’t bring myself to try again — for seven whole years! 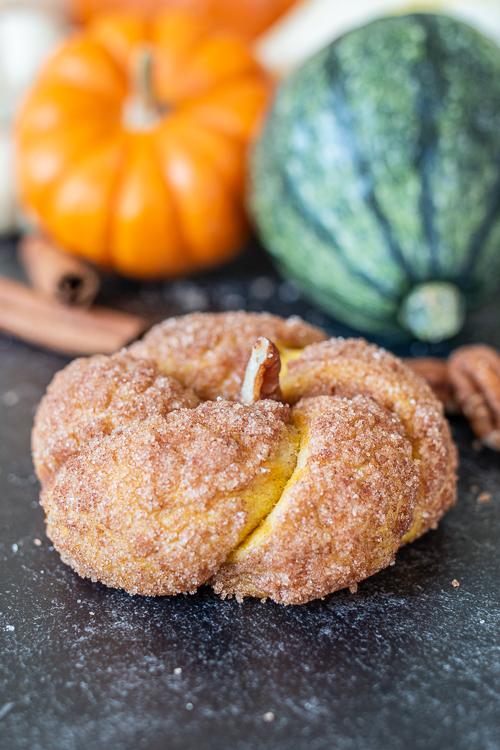 This fall, I finally felt brave enough to circle back to these Pumpkin Cinnamon Buns!

This time around, I dipped the rolls — after shaping — in butter and dredged them in cinnamon-sugar before baking. The sweet, spiced coating crisps up in the oven, giving these buns a crackly exterior that adds satisfying texture to the soft, tender rolls.

Interestingly, if you have leftover buns the next day, the sugar loses its crunch, making them more like sticky buns. It turns out that some people at my house prefer them that way!

In any case, I definitely recommend reheating leftover buns to enjoy them warm. About 10 to 15 minutes in an oven preheated to 300° F does the trick perfectly!

In addition to adding pumpkin puree to the dough for these buns, I decided to mix in another fall ingredient — apple cider! I loved how tender these Apple Cider Rolls turned out, so I’ve been looking for an opportunity to use cider in other yeasted dough recipes.

While they don’t taste like apple, these buns bake up incredibly light and fluffy — just like the Apple Cider Rolls. After his first bite, my husband, eyes wide, described these little pumpkins as having a doughnut-like texture. 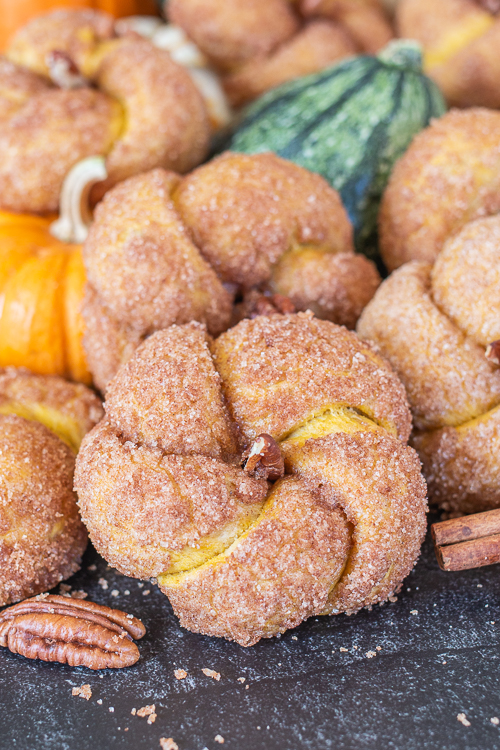 This fall-inspired yeasted dough also includes cinnamon, cloves, and freshly grated nutmeg, as well as maple syrup for sweetening. It’s so delicious! I can’t wait to try baking some loaves, monkey bread, or stuffed rolls with it.

Because of its soft, tacky texture, this dough is much easier to work with when it’s cold. I usually prepare it the night before and let it rise in the refrigerator overnight.

If you don’t have the time or inclination to wait that long, let the dough rise at room temperature for about two hours before shaping. I have done it this way, and it’s totally doable — just stickier! You’ll need to use a bit more flour than you would with chilled dough.

While these buns may look complicated, creating the pumpkin shape just involves tying some dough ropes in knots (see the recipe below for visual instructions). It’s actually quite a satisfying process once you get the hang of it! 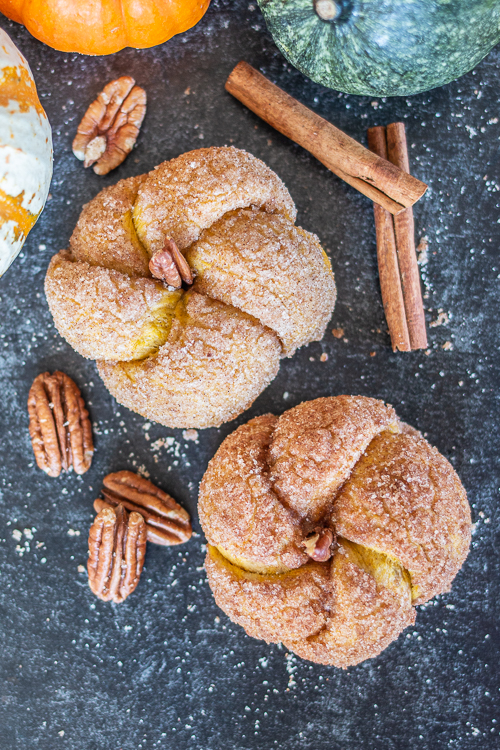 Once you’ve shaped the rolls, dip them in butter and dredge them in cinnamon-sugar! Slice some pecans in half lengthwise to use for stems and insert them in the buns’ centers.

After a rest at room temperature, bake the rolls in an oven preheated to 375° F for 20 to 25 minutes.

Since these buns are so soft, it can be hard to tell when they’re done baking. I totally undercooked them the first time I made them!

The easiest way to tell when they’re ready is to insert the probe of an instant-read thermometer into one of the buns. They’re done baking when the internal temperature reaches between 190 and 200° F. 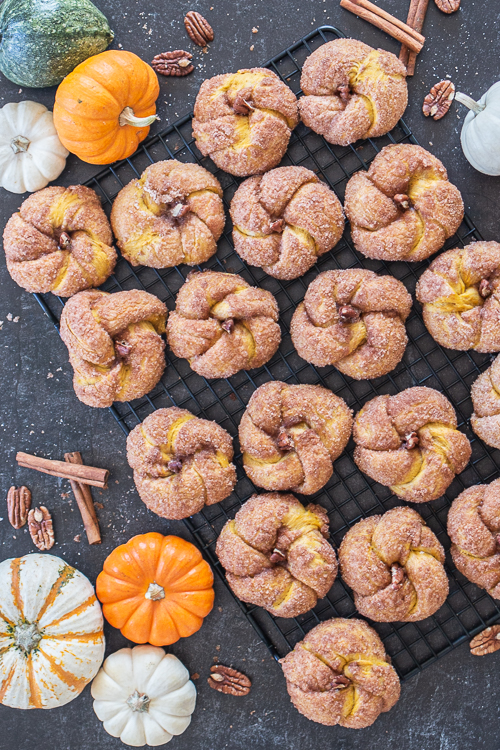 Let the buns cool for about 20 minutes before digging in — if you can wait.

These sweet treats make a great special occasion breakfast or brunch addition. They’re also awesome for snacking on in the afternoon!

While we’re not having any Halloween parties this year due to shelter-in-place, you can bet that I’ll bake these pumpkin-shaped buns for future fall festivities once life gets back to normal again. 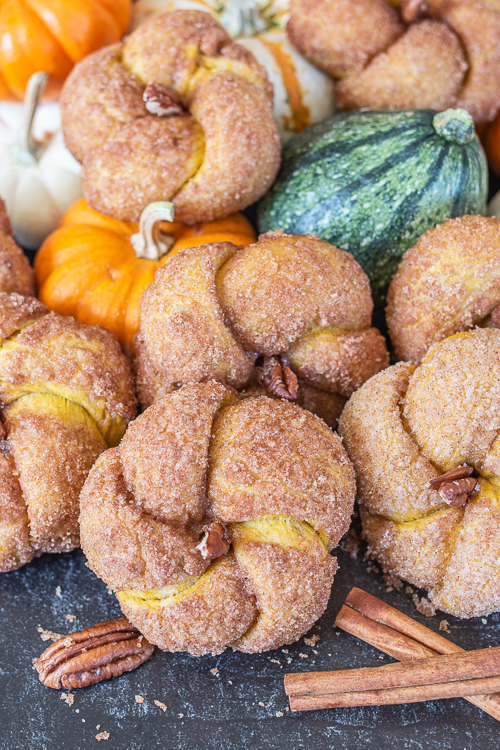 In the meantime, since this recipe feels a bit large for a family of four, I’ve been delivering little pumpkins to neighbors to spread some fall cheer!

They’re really best the day they’re made, so it seems only right to share! Happy fall! 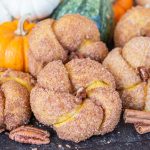 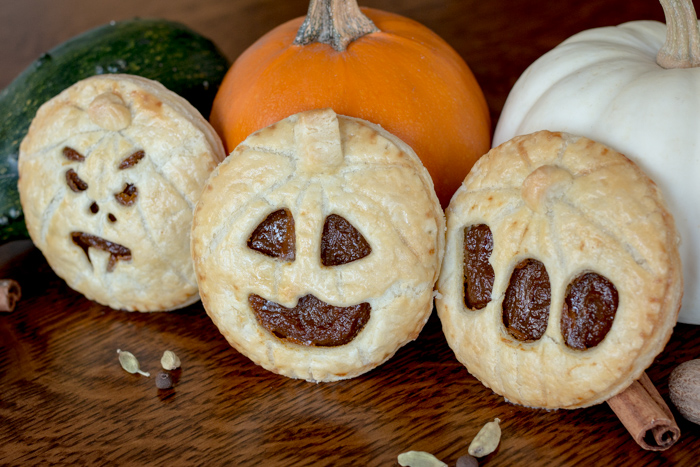 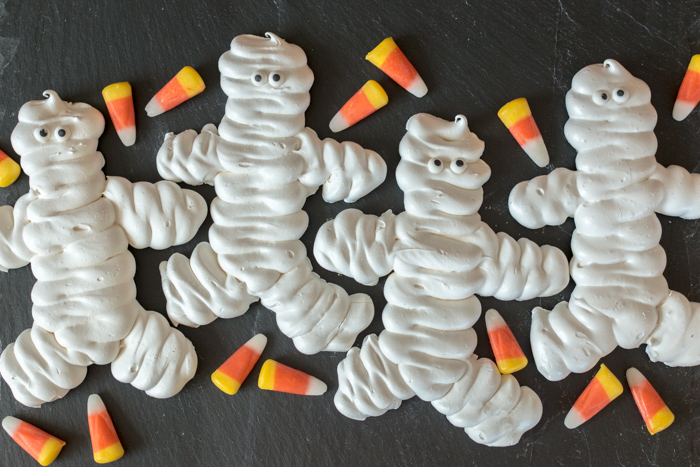 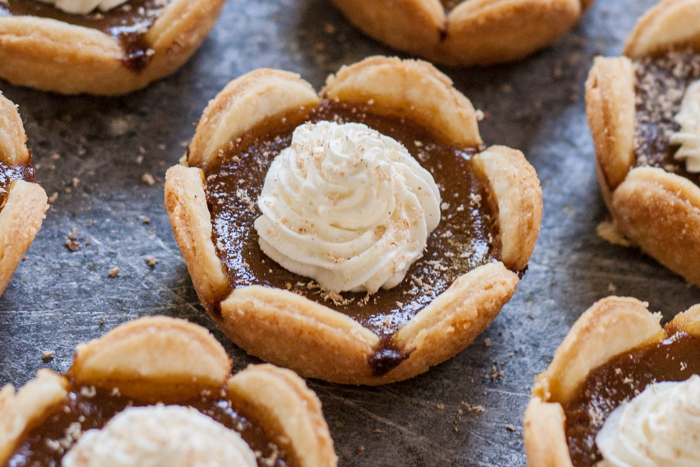